Wignalls Wines was established on the outskirts of the then Town of Albany in 1982, after extensive research and investigations into “Terroir” (Environmental factors creating wine quality) by our founder Dr Bill Wignall.

Climatology results from the nearby weather bureaux at Albany’s airport, showed Albany’s growing conditions in Spring and Summer were virtually identical to the famous wine growing region of Burgundy in central France, thus it was decided to experiment with Burgundian varieties such as the then unknown Pinot Noir, Chardonnay and Sauvignon Blanc – all well known in Australia today!

First vintages saw amazing results with Trophies and Gold medals for both Pinot and Chardonnay, and subsequently over sixty Trophies and Gold’s have been won by our family estate to date, both Domestically and more importantly Internationally.

A unique rustic cellar door was constructed in 2006 on site out of an abandoned hay shed, featuring local rock and rough sawn Jarrah timbers, as an older winery should portray its heritage. 2004 saw Wignalls cellar door Benchmarked by the “Winemakers Federation of Australia” as one of the best 25 cellar doors in Australia, a huge achievement for Dr Wignalls foresight of going against the grain in WA and making our cellar to look old and quaint, built out of local solid stone that the vineyard thrives in. It is usual for WA cellar doors to be ultra-modern with large areas of glass and stainless steel!

The winery now based on the outskirts of the bustling City Of Albany, was passed onto the second generation of winemakers with Bills son Rob and Daughter in law, Claire, in 2004 for the next evolution in Western Australian winemaking. With renewed emphasis on Sauvignon Blanc, Chardonnay and Pinot Noir, the main varieties are our vision, all expressing their individual terroir styles from arguably Western Australia’s most southerly based vineyard.

Along with our “Super Premium” wine styles, Wignalls also produces “every day” styles for your enjoyment, such as Unwooded Chardonnay and Cabernet Merlot, along with favourites such as a Rose` and Port available through our cellar door 7 days a week. 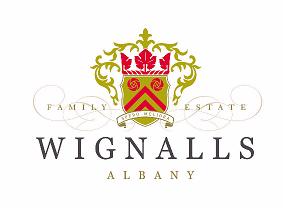